he almost died at birth, now we live with chronic disorders

My name is Lyn Wong, I am a mother and full-time carer to my teenage son Jayden. I represent the bleeding disorder community as a female bleeder combined with my life experience understanding what it’s like to have multiple chronic conditions.

I get great satisfaction from creating a supportive and safe place for people to connect so they don’t feel alone on their life journey.

Jayden almost died at birth and lives with a severe bleeding disorder that is complicated by chronic inhibitors. This rare condition has resulted in regular hospitalisations as well as numerous ICU admissions over a 15-year period, we basically lived out of the hospital.

I gave up my career, lost a number of close friends and family as I devoted my life to caring for Jayden as we learnt to live with multiple disorders including autism, asthma and other various health complications. 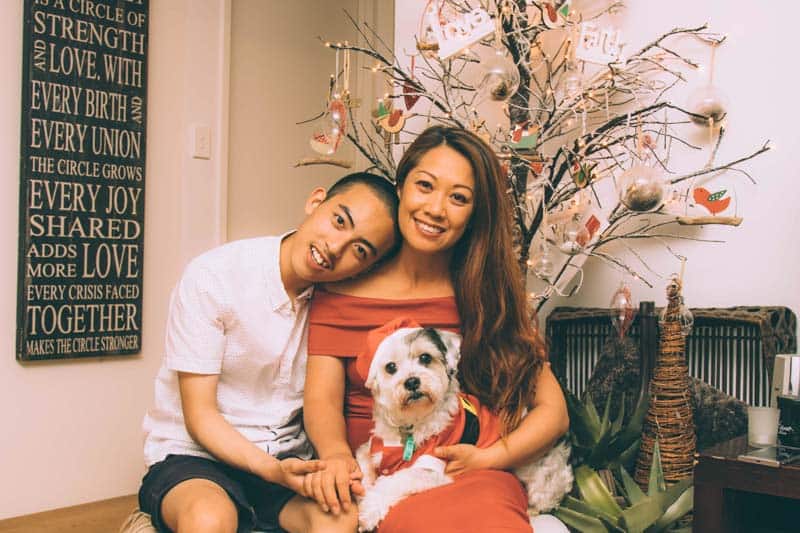 How was The RED Trail created?

‘The RED Trail’ is a metaphor for fostering a happy pathway in life and to inspire others living with a chronic disorder to ‘NEVER GIVE UP’.

Our aim is create a sense of community, inclusion and awareness.

In 2014, my son Jayden & I, created The RED Trail to raise awareness about his chronic bleeding disorder; Severe Haemophilia A with Inhibitors.

We initiated the very first Haemophilia Walk in NSW with a 7km Challenge raising much needed funds to help others live a fulfilling life with this incurable condition. 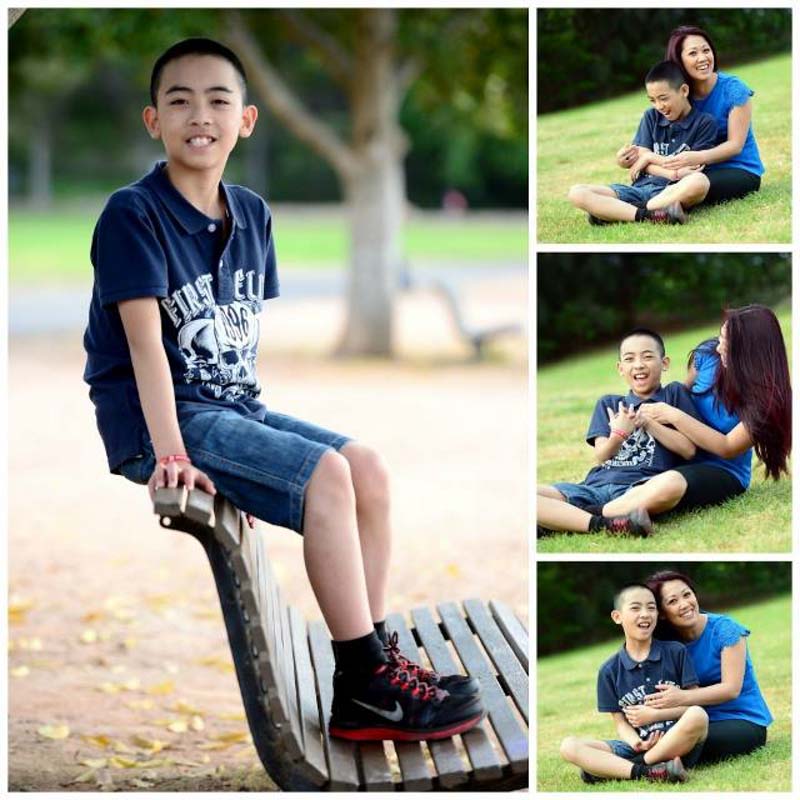 Whilst being a full time carer to her son with severe multiple disorders as well as managing her own chronic illnesses, Lyn has helped raise over $4 million dollars in donations via various fundraising events and activities. Her mission is driving to achieve greater awareness in the community about chronic disorders to support families where it is most needed.

Jayden and Lyn created their first fundraising event raising $11,560 for Sydney Children's Hospital Foundation. They hosted the 5km bike ride encouraging kids to get active, raising awareness about the bleeding disorders in children receiving medical care at Sydney Children’s Hospital which resulted in national donations to help purchase much needed equipment for the haematology clinic.

Jayden created artwork for the Family Calendar which secured 4 corporate sponsors and assisted in the calendar stall at the hospital raising a total of over $25,000.

Jayden and Lyn volunteered at the Starlight Day stalls selling merchandise to raise vital funds and awareness of the services in the Starlight Room.

Lyn created a brand-new website for The RED Trail. This allowed her to promote awareness to a wider national and international audience, subsequently increasing her fundraising goals where an increase in donations came through from overseas supporters.

Jayden and Lyn created and hosted the very first Haemophilia Walk in NSW and successfully increased community awareness about the life-long bleeding disorder that affects approximately 6000 Australians. The 7km Challenge raised over $8000 for Haemophilia Foundation NSW to fund educational and social activities to our bleeding disorder community.

The RED Trail increased bleeding disorders awareness via several media publications, including The Daily Telegraph, The Australian, Southern Courier, Mamamia, Nudie, We Bleed Australia and News Local. This helped to increase participation to our fundraising walk, resulting in almost doubling our fundraising total.

Jayden and Lyn was part of a filming production on location at Sydney Children's Hospital showcasing the journey of sick kids in hospital. Their role in the video helped raised $815,000 for this event.

Our 7km Challenge in its 2nd year raised over $15,000 for Haemophilia Foundation NSW to fund adventure therapy for children with haemophilia attending the annual camps.

Jayden was involved in several media articles and marketing campaigns about his chronic disorders that helped raise vital funds for the hospital, increasing their annual fundraising goals to over $4 million.

Lyn officially introduced The RED Trail’s first ‘Social Meet Up’ in Sydney which brought families living with chronic disorders together in a casual and relaxed atmosphere. Parents connected over a cup of coffee whilst the kids played at the newly upgraded park.

With the success of first social meetup, Lyn organised a second meetup at Avoca Beach with amazing support from the community – we even had Lightning McQueen come along! 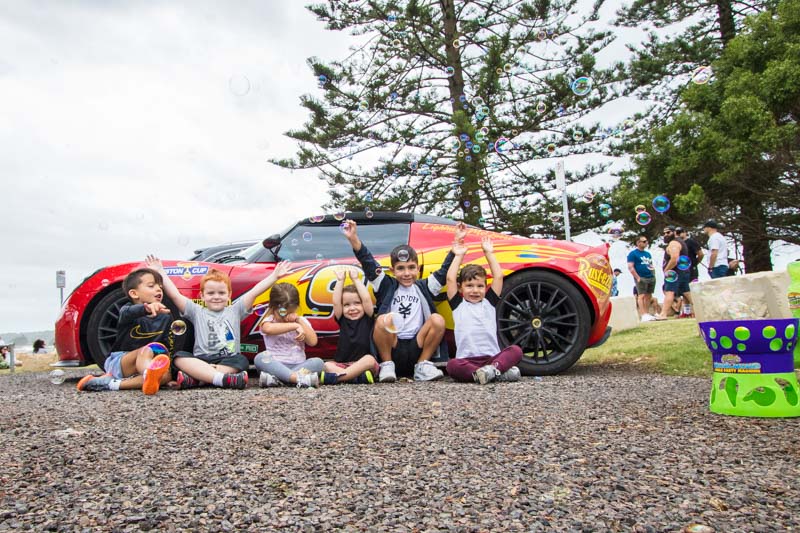 The RED Trail in the media 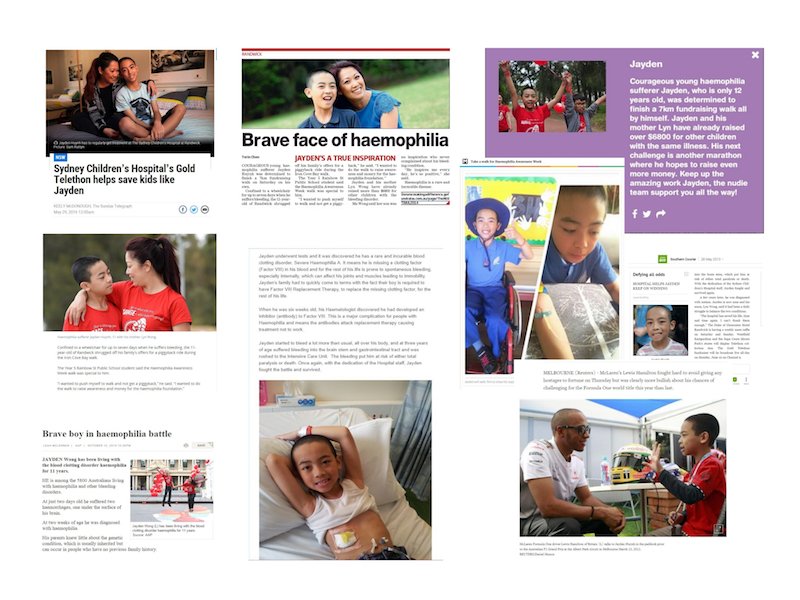 Get involved with The RED Trail

The RED Trail fosters a sense of community, inclusion and awareness by supporting families with chronic disorders in Australia

We will be hosting regular social meetups and other events through the year to help families connect with others who are going through a similar life journey. We welcome everyone to join us to meet inspiring families living with a chronic medical condition. Head to our events page to see what they are all about.
SHARE YOUR STORY

Do you, a friend or family member live with a rare or chronic disorder? Here’s your chance to have your voice heard. Help raise awareness by sharing your story and help others know they are not alone. Feel free to submit your story, attach some pictures and we will add you to our ‘Stories’ page

We are calling on corporate heroes to join us in making our event fun and successful for our rare and chronic disorder community. If you have any items you would like to donate to us for raffle draws, food & drinks for our events, children’s entertainment, as well as corporate donations, we would love to hear from you.

WHAT ARE CHRONIC DISORDERS?

The term chronic is usually associated with various illnesses and typically it is something that persists for a long time or is a constantly recurring condition. Typically it is used to describe a broad range of health conditions that can include;

These chronic conditions normally have these attributes;

Thankfully there are a lot of great treatments, therapies and management plan practices available that are helping people with chronic conditions to live longer.