How Brothers Luke and Jake Live with Severe Haemophilia A

This is Luke, 8yrs, & Jake, almost 6yrs of age. They both have Severe Haemophilia A.

Luke was diagnosed at 7mths of age after numerous bruises started appearing when he started to crawl.

Looking back now there were a few red flags that as a first-time mum I didn’t really think too much about. His heel prick test just continued to bleed for hours, and a random bruise on his back which I thought “wow did I do that by picking him up or bumping him on the cot?”. With no family history and 3 brothers, the chances of me being a carrier to the haemophilia gene, I thought were very slim. 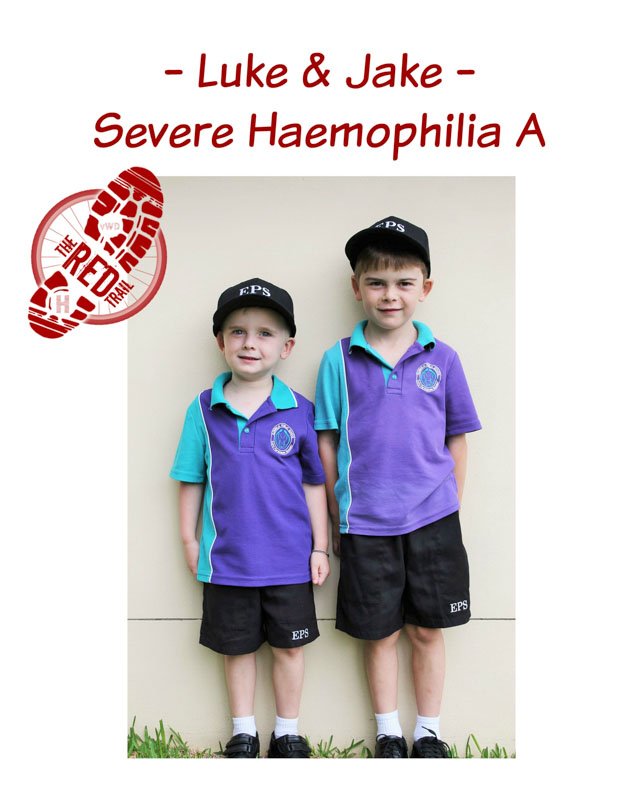 We met with the genetic counselor and had the DNA testing done and after that meeting we just got on with life, 1 trip to the local ER at a time.

I received the call from the genetic counselor some 4 months later, to be told that I was a carrier, to which I replied, “I am 5 weeks pregnant”. We knew at 18 weeks we were having another little boy but refused an amniocentesis (a medical procedure used in prenatal diagnosis of chromosomal abnormalities) due to the risks, and the result would not change anything. At 34 weeks I gave in and had an amnio to find that Jake also had haemophilia, which then changed my birthing plan.

Jake was born at Sydney Hospital for Women under the watchful eye of haematologist specialist, Dr Russell. Being that I already knew what life was like with my first son living with haemophilia, I felt more empowered this time, and going to the local ER for treatment was now just as simple as them canulating and me doing the rest.

I started Luke on prophylaxis when he was almost 3yrs old, and to this day some 5 years later we are still using the same vein and he will not let me go elsewhere.

Jake on the other hand was a total different story. I say Luke is my textbook haemophiliac, and Jake, whatever can go wrong … will.

In April 2012, we were due to go to Bali on a family holiday, and had our regular appointment for bloods a few weeks earlier. I received a phone call at 9pm, to hear Dr Russell on the other end of the phone. She said “Jake has a high-titre inhibitor.” Jake was just 2 years old, and I had no experience or really heard of inhibitors. (Inhibitors are antibodies developed by the immune cells to destroy foreign substance from the body. In Jake’s case, the inhibitor was neutralizing his factor that he needed to help prevent and control bleeds.) Dr Russell advised that Jake would not be able to travel to Bali and would need surgery to place a medical catheter; a port-a-cath, to combat the inhibitors as soon as possible. After much discussion we decided to travel to Bali, and Jake stayed home with his Nanny.

Upon our return, Jake had the port-a-cath inserted that sits on his chest, and started on daily high dose factor infusions to try and get rid of his inhibitor. After 4 months the inhibitor was gone, only to return 3 months later. It returned another 6 months, and we repeated treatment that eventually was successful. The inhibitor has been in remission ever since. Jake had his port removed in December 2015 just before starting kindergarten and we have been doing venipuncture since June 2015.

I do not stop my boys from doing anything really. They play hockey during winter. Luke snowboards, and Jake skis. They ride skateboards, scooters and bikes, and go to the BMX track as well as the skate park. We just deal with any issues when they arise and give preventative doses when I think it’s required. To date, we have only had a few joint bleeds, which thankfully are not recurrent.

Having two boys with haemophilia I believe is no different to having one, but actually in some ways it is better, as they support each other with their condition and will continue to do that for the rest of their lives.