What is a bleeding disorder?

Imagine your child falling over, cutting his lip or nose and the blood continues to ooze for weeks?

How would you feel watching your child sitting in his wheelchair whilst his friends climb trees?

Ever wondered why your child is still bleeding after what should be a simple surgery?

Has your sister, mother, or wife bled excessively during menstruation or childbirth?

What is Haemophilia or Von Willebrand Disorder (vWD)?

Both are life-long bleeding disorders that can affect a person’s quality of life without treatment.

Bleeding disorders are a group of conditions that result when the blood cannot clot properly. They are characterized by extended bleeding after injury, surgery, trauma or menstruation. Sometimes the bleeding is spontaneous, without a known or identifiable cause.

The body produces 13 clotting factors. If any of them are defective or deficient, blood clotting is affected; a mild, moderate or severe bleeding disorder can result.

The most common type of bleeding disorder in women is von Willebrand disorder (vWD). In someone with von Willebrand disorder (vWD), platelets are not able to stick together efficiently to prevent bleeding. Symptoms may include frequent nose and gum bleeds, bleeding after dental surgery, easy bruising, heavy menstrual periods or severe bleeding after surgery. Read more about haemophilia here (insert link to post)

People with hemophilia do not have enough clotting factor VIII or IX in their blood. A person with haemophilia often experiences internal bleeding, as a result, they can bleed for longer than normal. This can cause a wide range of bleeding episodes, usually into the joints or muscles resulting in pain and swelling. Over a period of time bleeding into joints and muscles can cause permanent damage such as arthritis, chronic pain and joint damage which would require painful surgery to treat.

Bleeds in both disorders can occur spontaneously, or as a result of trauma or injury such as a fall or knock. The bleeds are treated through an infusion of the clotting factor by intravenous injection. In severe cases, clotting factors are needed on a daily basis to help prevent bleeds. Currently, there is NO CURE.

Rare clotting factor deficiencies are bleeding disorders in which one of the other clotting factors (i.e. factors I, II, V, V + VIII, VII, X, XI, or XIII) is missing or not working properly. Less is known about these disorders because they are diagnosed so rarely. In fact, many have only been discovered in the last 40 years. 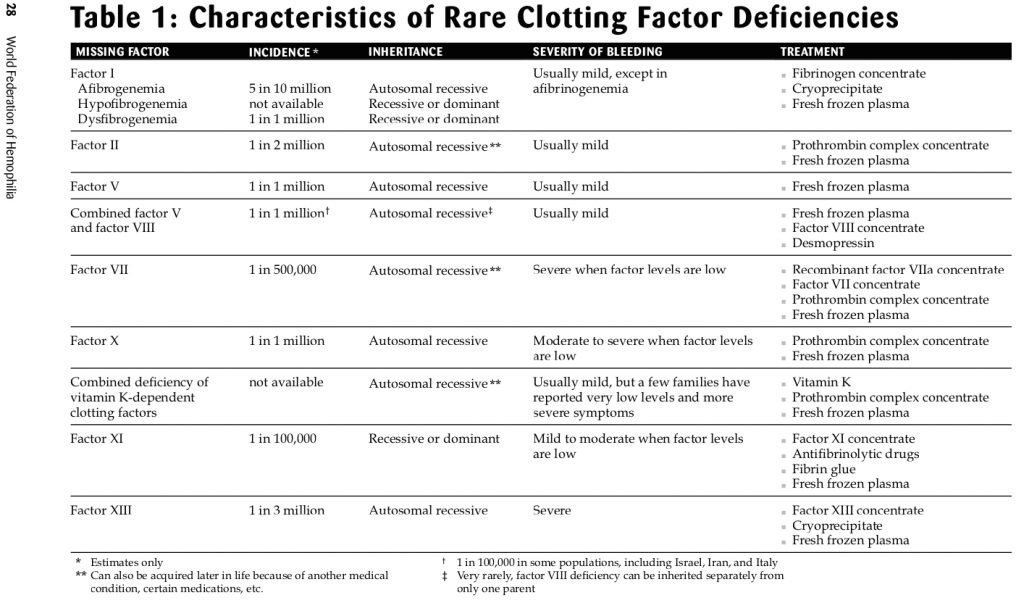 Symptoms of a bleeding disorder

–  Blood in the urine or stool
–  Bruising easily and excessively
–  Extreme fatigue
–  An injury that will not stop bleeding
–  Joint pain caused by internal bleeding
–  Nosebleeds that seem to have no cause
–  A painful headache that will not go away
–  Prolonged bleeding from ordinary cuts or from surgery or dental work
–  Sudden pain, swelling and warmth in joints or muscles
–  Vision problems, such as double vision
–  Vomiting repeatedly